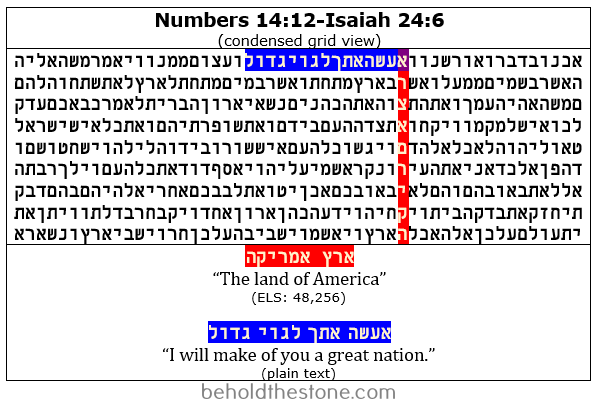 America in the Bible code: Introduction

In a previous article, I showed how the word “America” was encoded in part of Moses’ farewell address in Deuteronomy 30, and explained how the historical relevance of that specific passage as pertaining to America’s colonial roots made it very difficult for me to believe that that encryption had occurred by random chance. Today I would like to share a similar albeit more recently discovered code with similar implications, which in my view is far more impressive and statistically significant than the previous one. I thus invite you to sit back, relax, and enjoy this second demonstration of America in the Bible code.

Until now, all of the Bible codes I have shared on this blog have been what I refer to as short-distance ELS codes. As I have explained in previous articles, I define short-distance ELS codes as ELS codes which are encoded at letter-skip sequences of <= 150. Because they are found at such small letter-skip sequences, such codes have small containing passages.

The code that I am about to reveal is what I refer to as a long-distance ELS code, which I define as an ELS code encrypted at an equidistant letter skip sequence of >= 1,000 letters. The reason that I have never shared a long-distance ELS code on this blog before is because prior to the discovery of the code I am getting ready to reveal (as well as others which have come to light since then), I did not think that the existence of long-distance ELS codes was even possible. The reason that I did not believe their existence was possible was rooted in my understanding of Bible codes at the time, which had been shaped by a little intellectual stumbling block that I refer to as the problem of orthographic diversity. However, a series of recent discoveries have since altered my views with regard to Bible codes and their limitations, to the point that a significant portion of the conclusions I articulated in this article have now been invalidated. I intend to explain at length how my understanding has been been re-shaped as more recent discoveries have come to light in a future article, but for the time being suffice it to say that I am now a believer in the reality of long-distance Bible codes.

In most of my previous articles on Bible codes, I have presented the codes in a two-column tabular view format, with the Hebrew text in the right column and the English translation in the left column. The main reason I have done this is simply because I know that most people can’t read Hebrew, and providing the containing passage in English translation is my attempt at making the topical relation plain for all to see. Going forward, however, I am going to be presenting most Bible codes as they actually appear within the grid.

I know that there are likely going to be a lot of people reading this who are not acquainted with the concept of the grid, so allow me to take a moment to briefly explain what it is. When a code researcher executes an ELS search for a specified text-string, the software program scans the entire text of the Hebrew Bible looking for any occurrence of that string at all potential equidistant letter sequences within a range specified by the user. If the specified string is found encrypted anywhere in the Hebrew Bible within that specified range, the computer program removes all spacing from the text of the Bible, and then organizes the entire text into rows consisting of x amount of letters, where x is equal to the number of letter skips that string is found encoded at. This meticulous restructuring of the text is known as the grid. One consequence of organizing the text in this way is that it causes the encoded string to appear within the grid in a convenient vertical line. The divine authenticity of any given code is affirmed when it intersects or converges with obvious lines of topical correspondence in the plain-text of the containing passage to form meaningful prophecies and/or statements contrary to the laws of probability.

To demonstrate what I have just explained, consider the following example. A search for the string מנרתבני at an ELS of between 2-150 yields 1 positive encryption.1 The program indicates that it is found at an ELS of every 40 letters, beginning in Zechariah 3:8 and ending in Zechariah 4:1. Here’s what that code looks like in the grid:

So to begin, note that the computer program has removed all spacing from the text of the Hebrew Bible, so that what we are left with is the entire text of the Tanakh as one continuous string of letters. In this example, the encoded phrase is found at an ELS of every 40 letters, and therefore the software program has organized the text of the Bible into rows of 40 letters. This causes our encoded string (highlighted in red) to be displayed in a convenient vertical line within the grid as seen in the figure above. As can be seen, the code’s authenticity is attested by the presence of obvious phrases of topical correspondence in the plain text of the containing passage (highlighted gray & blue in the grid above).

Note that the number of letters in each row within the grid is always equal to the number of letter-skips the code is found encoded at. Thus if the encoded string in this example had been found encoded at an ELS of 107 letters instead of 40, the software would have organized the grid into rows consisting of 107 letters. If it had been found at an ELS of 83 letters, the rows in the grid would be 83 letters long. You get the idea.

America in the Bible code revealed

Now that we are clear about how Bible code grids function, we are ready to analyze the proverbial “America in the Bible” code matrix. The code that I am about to reveal was discovered about a month ago. It involves a string that is nine letters long, and is found at an ELS of every 48,256 letter skips. Having such a tremendously large equidistant letter skip sequence means that the entire encryption has an enormous containing passage spanning across multiple biblical books–nine to be precise, with each letter of the encoded string being found in a different biblical book.

The code begins in Numbers 14:15 and ends in Isaiah 24:6, and is found exclusively in the Leningrad codex. Behold:

As the encoded phrase is found at an ELS of every 48,256 letters, each line of our grid in this example represents a row of text consisting of 48,256 letters. The first letter of the code in this example is the aleph in the word ואעשה in Numbers 14:12. When you start at that letter and count forward another 48,256 letters–you will eventually end up at the letter resh in the word ואשר in Deuteronomy 5:8. Count another 48,256 letters from that letter, and you end up at the tsade in the word תצוה in Joshua 3:8. You get the idea. Counting 48,256 letters a total of eight times beginning from that first aleph in Numbers 14:12 spells out the phrase ארץ אמריקה (“the land of America“). The entire encryption from start to finish spans across 9 books of the Hebrew Bible.

I have constructed the table below to show what verse each letter of the code appears in:

I think the topical relation between the encoded string and its containing passage in this example is self-evident. The encoded phrase (“the land of America”) converges with a line in the plain-text of Numbers 14:12 to form a coherent meaningful prophecy about the future nation of America, that line being: אעשה אתך לגוי־גדול (“I will make of you a great nation”).

What is remarkable is that the first letter of the encoded phrase in Numbers 14:12 is also the first letter of the statement of topical correspondence in the plain-text (hence the reason I have colored the aleph they both share purple). Both statements converge to form one unified cryptic prophecy concerning the future nation of the United States of America: “The land of America–I will make of you a great nation.” Given that the United States is the world’s only remaining superpower, I think it’s safe to say that this prophecy has been fulfilled.

America in the Bible code: Conclusion

To the skeptics out there who would roll their eyes at this revelation and write it off as a meaningless statistical coincidence, I would simply point out that this is the one and only time that this nine-letter string appears encrypted in the Hebrew Bible. Given that our encoded phrase in this code matrix is nine letters long and contains two rare letters–it would be a miracle enough just to find this phrase encoded in the Bible. What then are the odds that the phrase would not only be encoded, but would also just so happen to intersect with such a blatantly obvious statement of topical correspondence the one and only time it appears encoded in the Bible? What are the odds that these two statements would converge to form what appears to be one unified coherent prophecy about a future nation and superpower? My guess would be somewhere next to zero. One need not be a statistician to perceive that this code is here by deliberate design. The divine authenticity of the encryption in this example is self-evident.