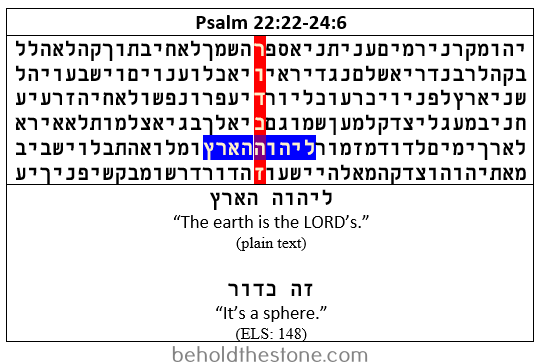 Contents hide
1 Introduction
2 Psalm 22, 23, and 24
3 The code which states that the earth is round
4 Conclusion

In recent years, I have increasingly become aware that there are a growing number of Christians who are convinced that the Bible teaches that the earth is flat. This view is based on a very rigid overly-literal interpretation of figurative language used in various biblical passages (e.g. “the four corners of the earth”). This may seem like a trivial matter, and while it is true that one’s salvation is not predicated upon their cosmological worldview–it is nevertheless my opinion that this is a demonically inspired doctrine that was conceived with the intent of attempting to discredit the Church by making Christians appear cooky and anti-science to the general public. As such, I feel that I have a duty to speak out and refute this nonsense. In this article, I am going to share a Bible code that the Lord revealed to me last year which very clearly indicates that the earth is round. It is my sincere hope that the publication of this revelation will clear up some of the confusion regarding this matter, and also provide some much needed ammunition to my fellow soldiers of the gospel.

The code I am going to share today spans across three psalms in the book of Psalms (psalms 22, 23, and 24). All three of these psalms are psalms of David, which allows us to very easily date them to 70-year bracket corresponding to David’s lifetime (ca. 1040 – 970 BC). Given that the code spans across three entire psalms, the order in which these psalms appear in the book of Psalms is obviously just as relevant as their textual content in making the code possible–as all three psalms must appear next to one another in the correct order in order for the encoded message to appear. It is impossible to pinpoint the precise time that these three psalms were settled into their present arrangement within the book of Psalms. However, it is generally believed that the book of Psalms was compiled and codified into its present form sometime around the time of Ezra (ca. 450 BC). Thus if I were to make an informed guess, it was probably around that time that the 150 psalms found in the book of Psalms were organized into their familiar present arrangement.

The code which states that the earth is round

Note that in previous posts where I have revealed Bible codes, I have always charted the codes in a distinct 2-column tabular format–with the Hebrew text in the right column and the English translation in the left column. Due in part to the fact that today’s example is encrypted near the end of the short-distance ELS range (<= 150 letter skips), I thought I’d try something new and share the code in a condensed grid view instead. This format will allow me to not only easily fit the entire code into a table small enough to screenshot, but it will also allow you to see the code as it actually appears within the Hebrew text grid. So without any further a due, here is the code matrix:

As can be seen, the phrase זה כדור (zeh kador), meaning: “It’s a sphere“, is encrypted in Psalm 22:22-24:6 at an ELS of every 148 letters backwards, beginning at the first letter of Ps. 24:6. Given that the encoded string in this example is only 6 letters long, one might be tempted to conclude that this is a statistically unimpressive encryption at first glance. However appearances can be deceiving. Despite being only six letters in length, the string contains 1 very rare Hebrew letter (zayin), and as a consequence–this is 1 of only 2 passages where this six-letter string is found encrypted in the Tanakh at a short-distance ELS.

The authenticity of the code is attested by the topically relevant opening line of Psalm 24 with which it intersects, namely: “The earth is the LORD’s.” Given the aforementioned rarity of the encryption, the fact that our encoded statement just so happens to collide and intersect with this plain-text statement of Psalm 24:1 obviously screams deliberate design. When you read the two statements together, an entirely new coherent message is revealed: “The earth is the LORD’s. It’s a sphere.“

Another reason that I am absolutely certain that this code did not occur by random chance is because modern Hebrew actually combines the word for “sphere” in our encoded string (כדור), with the ancient Hebrew word “earth” (הארץ) to form the modern Hebrew compound noun used to denote Earth in the planetary sense. To this truth Google translator bears witness:

Thus, when modern Israelis speak of “Earth” in the planetary sense, they don’t merely say: “earth”, but rather: “the sphere of the earth.” This construction is completely unique to modern Hebrew.

If one wants to believe that the earth is flat–that is their prerogative. But no biblical justification can be offered to defend this view. So far as I am concerned, the Bible code I have presented in this brief analysis proves that this cosmological worldview runs contrary to the witness of Scripture, which very clearly states that the earth is round. What is more, any unbeliever who would argue that the Bible teaches that the earth is flat stands just as corrected by the revelation set forth in this analysis. God is perfect in knowledge (Job 36:4; 37:17), and is unaffected by the laws of time (2 Tim. 2:9; Isa. 57:15). Man’s relatively recent discovery that the earth is round was not a revelation to him, and the Bible code that we have just looked at proves that he was well aware of this fact thousands of years before man was. Indeed, as Jesus boldly proclaimed in Matthew’s Gospel: “Behold, I have told you before.” (Matt. 24:25)