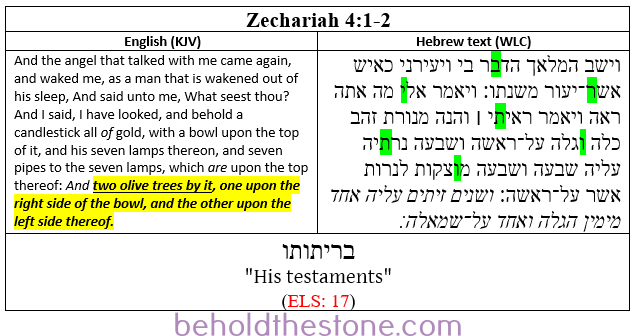 In a previous post, I demonstrated that the golden candlestick (Exod. 25:31-40; Zech. 4:1-14) functions within the biblical canon as a symbol of the completed Holy Bible–divided into two testaments containing 39 books and 27 books. In yet another previous post, I also made the related claim that the two witnesses (symbolized as two olive trees in the Zechariah 4 vision) are Moses and Elijah, who themselves function within the biblical canon as personifications of the Old and New Testaments. In those articles I established the truth of both of these claims with several independent lines of biblical evidence. In this brief post, I am going to publish yet another independent line of evidence which reinforces these conclusions. This involves another recently discovered Bible code in Zechariah 4.

A brief re-cap of the vision of Zechariah 4

I would hope that anyone reading this article is familiar with the prophetic vision of Zechariah 4. In this vision Zechariah is shown a golden candlestick (like the one for the tabernacle described in Exodus 25:31-40) with a golden bowl on top of it, with seven golden pipes connecting the bowl to each of the seven lamps. On either side of the bowl are two olive trees–one on the left and one on the right. These are emptying their golden oil into the golden bowl atop the candlestick via two olive branches. The golden oil of the two olive trees thus gets poured out into the golden bowl atop the candlestick, where it is merged together and distributed via the seven golden pipes to each of the seven lamps of the golden candlestick.

Prophetic meaning of the vision of Zechariah 4

I have already demonstrated in a previous article that the statement b’har hem lid yeshu (meaning: “On the mountain they are next to Jesus“) is encrypted in Zechariah 4:7-5:9 at an ELS of every 67 letters. I explained how this is a divinely encrypted hint, informing us that the two olive trees in this vision are two men who are standing beside “the Lord of the whole earth” on a mountain. I explained how this is very obviously an allusion to the various accounts of the transfiguration of Christ found in the synoptic gospels–where Moses and Elijah appear in heavenly glory standing on a mountain next to Jesus as he is transfigured in front of Peter James and John (Matt. 17:1-9; Mark 9:1-10; Luke 9:27-36). In that article I went on to explain how Moses and Elijah function within the biblical canon as personifications of the Old and New Testaments, and I showed how this can be biblically demonstrated in multiple ways. I concluded the article by asserting that the prophetic vision of Zechariah 4 is (on one level) an allegorical picture of the Old and New Testament literature (symbolized by the two olive trees who are Moses and Elijah) being merged together to become one unified testimony of Jesus Christ in the Holy Bible, which is symbolized by the golden candlestick. I would like to share yet another Bible code I recently found that provides additional support for this conclusion.

Another hidden Bible code in Zechariah 4

The encrypted word beriythoto is the plural form of the Hebrew noun beriyth, which means “covenant” or “testament” (see screenshot below). It contains a suffixed vav (3rd person masculine pronominal suffix), indicating the possessive pronoun ‘his‘, thus rendering the meaning of the encrypted word: “his testaments.” It should be noted that this is 1 of 3 OT passages in the entirety of the Hebrew Tanakh where this seven letter word appears encrypted at a short-distance ELS.1

I am arguing that God deliberately encrypted the word “his testaments” at the beginning of this vision, in order to provide additional proof that the two olive trees in this vision ultimately represent the Old and New Testaments.

Conclusion on the Bible code in Zechariah 4

The Bible code in Zechariah 4:1-2 is yet another member of a large body of irrefutable biblical evidence which collectively points to the inevitable conclusion that the two olive trees in the Zechariah 4 vision represent the Old and New Testaments. As I stated in a previous article, this conclusion is further reinforced by the prophetic vision of Revelation 11, where the beast that ascends out of the bottomless pit makes war against the two olive trees. When the two olive trees are viewed as the Holy Scriptures as exemplified in the Old and New Testaments–the meaning of prophetic vision is suddenly unlocked, and we are able to understand that what John the Revelator was being shown was the Satanic war against the Holy Bible. This war would culminate in the proverbial crucifixion of God’s two testaments, whose authority he destroyed in the eyes of unregenerate men.