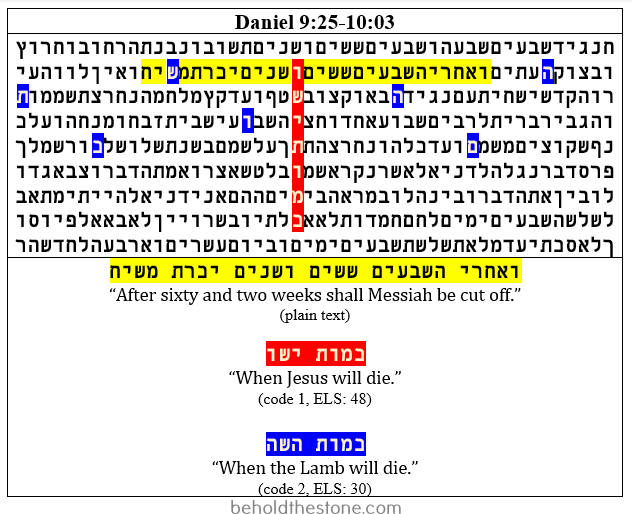 In my last post, I showed how the 70 weeks prophecy of Daniel 9 gives an accurate prophetic countdown to the arrival of Israel’s messiah–accurately predicting the exact year of his first appearance and death. As we saw, this prophecy clearly indicates that the messiah would appear, and then be “cut off”, in the year 33 AD–a fact which essentially proves beyond any reasonable doubt that Jesus is the messiah of Israel. In this article, I am going to share two Bible codes I discovered a little over a year ago which affirm and validate the truth of this interpretation of the prophecy. For the sake of convenience and clarity, I will throughout the remainder of this article speak of these codes as one entity, and will refer to them collectively as “the Daniel 9 Bible code.”

As can be seen, Daniel 9:25-10:3 contains a set of what we might call twin prophetic encryptions. On the one hand, we find the statement כמות השה (kamoot ha-seh), meaning: “When the Lamb will die” encrypted at an ELS of every 30 letters backwards, beginning at the letter kaph in the word לכורש in Dan. 10:1. The highly similar statement כמות ישו (kamoot yeshu), meaning: “When Jesus will die”, is also encrypted in the above passage–this one being found at an ELS of every 48 letters backwards, beginning at the kaph in the word אכלתי in Daniel 10:3. Both statements are encrypted right next to one other, in the only prophecy in the entire Old Testament which gives a prophetic countdown to the exact year of the Messiah’s death. The image below shows how the codes actually appear in the text-grid:

The encryption frequency of both encoded strings in this example are each within a range which make the odds of either one occurring in this topically relevant passage (by themselves) just by random chance to be highly unlikely, though far from statistically impossible.2 However, this is with regard to either of the two encrypted strings being found in this passage by itself. The probability of both of them being found in this topically relevant passage together side-by-side, intersecting with a prophetic countdown to the death of the messiah, all by random chance–is somewhere next to zero. There is absolutely no question that these are two very deliberate encryptions.

While the entire Old Testament is saturated with messianic prophecies (some of which are more obvious than others), Daniel 9:24-27 is unique in that it is literally the only passage in the entire Old Testament that provides a precise prophetic timeline which forecasts the first coming of the messiah, and also predicts the precise year of his sacrificial death. The prophecy predicts that the messiah would be “cut off” (killed) 69 weeks (483 years) after the decree to rebuild Jerusalem unto the messiah was issued. As I demonstrated a recent article, the book of Nehemiah reveals that this commandment came by the mouth of Nehemiah in the year 445/444 BC (Neh. 2:17-18). I explained how biblical prophecy always goes by a 360-day year, and therefore the 483 years of the Daniel 9 prophecy must be converted to 365.24219 day years before we can calculate the precise year of the messiah’s death on our modern Western calendar using the information given in the prophecy. We saw how 483 years of 360 days translates to almost exactly 476 years on our modern Gregorian calendar, and 476 years from the year 444 BC takes us to the year 33 AD—the year that our Lord was crucified. Thus, by encrypting the statements “When the Lamb will die” and “When Jesus will die” in this specific passage, God is affirming that Jesus is the Messiah, and that this prophecy in Daniel 9 is indeed about him. It is as if he is saying: “Yes, this is a prophetic countdown to the year of my death. Enjoy.”3

A wise man once said: “Let us hear the conclusion of the whole matter” (Eccles. 12:13). The conclusion of this matter is that the prophecy of Daniel 9 accurately foretold centuries in advance the precise year that the messiah would appear and be crucified. And it just so happens that the twin prophetic statements “When the Lamb will die” and “When Jesus will die” just so happened to both be found encrypted together here side by side, against all statistical odds–in this one and only prophecy in the entire Old Testament which foretells the precise year of the messiah’s death. As if the historical precision of the prophecy wasn’t enough by itself to convince us that the prophecy of Daniel 9 is about Jesus, God has provided us with a second irrefutable line of evidence to reinforce the truth of this interpretation. Indeed, the Daniel 9 Bible code proves beyond any reasonable doubt that the messiah spoken of in the 70 weeks prophecy of Daniel 9 is none other than Jesus Christ.