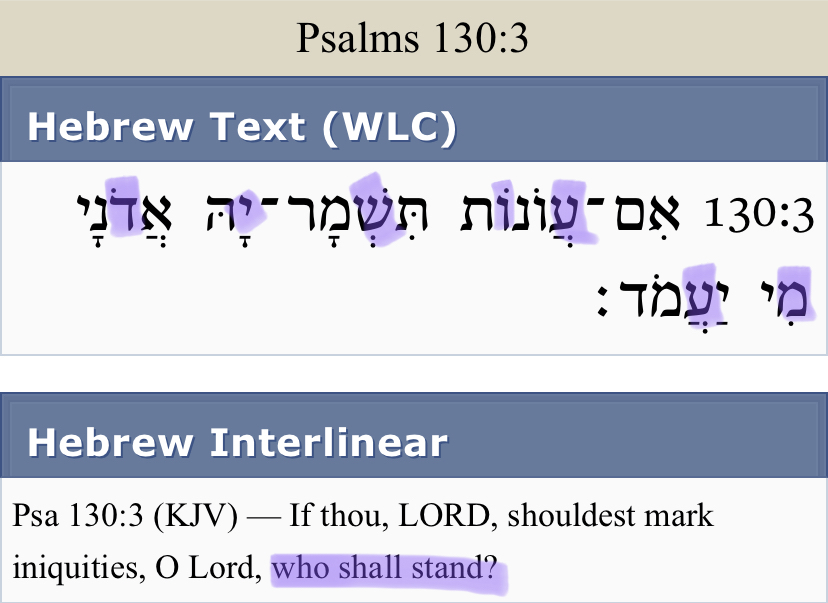 Today I am going to share one of my top 10 favorite ELS Bible codes that I have ever had the pleasure of discovering over the course of my research. The code is found in the 130th Psalm at an equidistant letter skip sequence of every 3 letters backwards. Because it is encrypted at such an exceedingly short letter skip sequence, the entire encoded statement is contained within a single verse, which is one of the reasons it is so powerful. I like this code a lot because I find that it beautifully showcases not only God’s creative genius, but also his witty and playful sense of humor–thus allowing us to get a glimpse of his humanity. So without any further ado, let us dive in and have a look at the precious hidden Bible code in Psalm 130:3.

Before I present the code, something should be said of what we know of the historical context of Psalm 130. The book of Psalms contains material that (in the traditional view of biblical authorship and dating) was written as early as the fifteenth century BC (Ps. 90:1), as well as other material that must have been written after the fall of Jerusalem to Babylon (Ps. 137:1-9). Perhaps the most notable contributor of material to this book is King David—a fact which allows us to date a large bulk of the psalms in this book to the late eleventh to early tenth centuries BC (when David lived). Although the individual psalms in the book were all composed at different times, it is generally agreed that the book as a whole was codified and put into its more or less present form about the time of Ezra—perhaps in the mid to late fifth century BC.

Unfortunately, Psalm 130 is one of many anonymous psalms in the book of Psalms which contains no information that would allow one to confidently surmise its date of composition, which makes dating it impossible. The fact that it is not labeled as “a psalm of David” means that it is almost certain that David is not the composer. It is likely that it was a psalm that was performed by Levitical musicians in Jerusalem (1 Chron. 6:31-32; 1 Chron. 15:16; 16:4-6; 25:1-7; 2 Chron. 5:12; 7:6; 34:12), which if true would likely place its date of composition to any time during or after the reign of David. If I had to make an educated guess, I would say that Psalm 130 was most likely composed sometime during or just before the first Temple period (ca. 960 BC – 586 BC). However this is just my own personal view. Regardless of who wrote it and when, ancient manuscripts of the book of Psalms found among the Dead Sea Scrolls allow us to conclude with certainty that this psalm was in its present textual form long before the life of Jesus.

The Bible code of Psalm 130:3 was discovered a little over a year ago–at 6:26 a.m.on July 11, 2021 to be precise. It is what I refer to as a Type 1 ELS code, insomuch as it directly testifies of Jesus. Note that I have used the NIV to provide the English translation in this particular example, only because this is one of those verses in which the meaning of the verse is much more clear in present day English than in the Shakespearean dialect of the KJV. Behold:

To prove that I am telling the truth, the following screenshot reveals what happens when you enter the encoded Hebrew string into Google translator exactly as it appears in the table above (with an added space between the two words). Behold:

Here we can see that the above verse from Psalm 130 is impregnated with what is very obviously a coherent statement whose topical relevance to the verse containing it is obvious. Counting every 3 letters backwards from the ayin in the word יעמד, spells out עמד ישוע (amad Yeshua), which literally translates to English as: “Jesus stood.” It should be noted that this is the only passage in the entire Hebrew Tanakh where this seven-letter text string is found encrypted at a short distance ELS.1 In other words, a coincidence can be safely ruled out—given that this statement appears encoded here and no where else in the entire Hebrew Tanakh.2

What the encrypted statement is saying is obvious. In the plain-text of the verse, the speaker speaks to the Lord and asks “If you kept a record of sins, who would be able to stand?” The question is founded on the premise that no one would be able to stand (be justified) before God if he kept a record of our sins—because all men are sinners by nature. Every human who has ever lived except for Jesus (God himself) has sinned (Rom. 3:10; 3:23; 5:12; cf. 1 Kings 8:46; 2 Chron. 6:36; Eccles. 7:20). The encoded statement is a direct reply to the question posed in the verse containing it: “Jesus stood.” The obvious inference of the encrypted statement is that Jesus alone was sinless.

The Law is God’s standard of righteousness, and sin is biblically defined as the transgression of the Law (1 John 3:4).3 Because the Law is one unified testimony, if a person is guilty of breaking even one of the least of its commandments and precepts—they have broken the entire thing (Jas. 2:10), and are subsequently declared unrighteous in the sight of God (Rom 3:19). All human beings whose paternal ancestry goes back to Adam are sinful by nature (Rom. 5:19; 1 Cor. 15:21-22), and therefore it is impossible for us to keep the Law. We sin merely by existing. Our very thoughts and desires are evil and contrary to the Law of God (Rom. 8:7; Col. 2:14; Jer. 13:23). Jesus was fully human (John 1:14), but unlike every other human being (as he had no earthly biological father), he did not inherit the Adamic sin nature. His human nature was pure and uncontaminated by sin (1 Pet. 1:19; Exod. 12:5), just as Adam’s had been before the fall. He is the only human being to ever walk the earth who perfectly kept the righteousness of the Law (Matt. 5:17), and thus to never sin. So far as sin is concerned, Jesus has a literal perfect record before the throne of God (Rev. 5:6; 7:17). He is the walking embodiment of moral perfection (Ps. 50:2).

Conclusion on the Bible code of Psalm 130:3