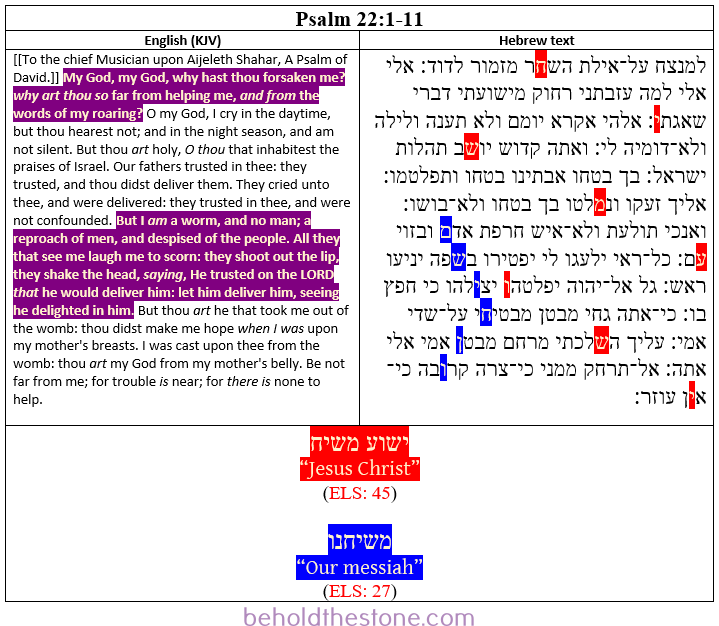 In a previous post, I revealed how the Hebrew phrase שמי ישוע (“Jesus is my name”) is encrypted in the Hebrew text of Isaiah 53:8-10–a code that I referred to as “the Bible code of Isaiah 53”. Because that little revelation has generated a lot of interest, I thought I’d publish another of the very same likeness. In this post I will reveal and very briefly explain the significance of another ELS code that I will refer to as “the Bible code of Psalm 22.”

What are ELS Codes?

In order to be able to receive and understand the Bible code of Psalm 22, one must first have a working knowledge of ELS codes. ELS is an acronym which stands for Equidistant Letter Sequencing. I intend on doing a very detailed comprehensive post at some point in the near future on ELS codes, as they constitute a very important type of canonical watermark which is a powerful and irrefutable witness to the divine authenticity of the Holy Bible. Yet for the sake of the present discussion, all that needs to be said is that ELS codes refer to divinely planted prophetically relevant messages encrypted in the Hebrew text of various Old Testament passages at a particular letter skip interval, or LSI.1

To illustrate very quickly by way of a very simple example, note the following example sentence:

THIS IS HOW ELS BIBLE CODES FUNCTION

Note that if you start at the first “E” in the above example sentence and count every sixth letter (and do this twice), you will find that it spells out “ELS.” This is the phenomenon of biblical ELS codes in a nutshell. The idea is that there are meaningful words, phrases, and even whole statements that are encrypted at equidistant letter sequences within the Hebrew text of the Old Testament which are topically relevant to the specific passages in which they are encoded. These codes very often manifest as prophetically meaningful and topically relevant commentarial remarks made by God himself about something going on in the passage in which the remark is encoded.2

What is the Bible Code of Psalm 22?

If you begin at the yod of the word אין in verse 11 and begin counting backwards and repeatedly skip every 45 letters until you get to the beginning of the psalm–you will find that it spells out: ישוע משיח (“Yeshua Mashiach”), which is the Hebrew rendering of “Jesus Christ.”

Because I don’t want you to just blindly take my word for it, I encourage you to count the letters for yourself (remember that Hebrew reads from right to left):

For those of you who cannot read Hebrew, the following screenshot reveals what happens when you type the above encoded phrase into Google translator:

It should be noted right off the bat that ELS searches for one continuous text string of this length (8 letters) at a standard ELS of between 2-150 letters rarely yields any results.3 It is rare for text-stings of this length to be found encoded anywhere in the Bible at such a short ELS, and it is therefore usually promising when the computer finds even one positive encryption for a text-sting of this length. Finding “Jesus Christ” as one continuous text string encoded anywhere in the Old Testament at an ELS of less than 150, and especially less than 100, is remarkable–and this is especially true in light of the fact that it happens to contain 2 letters (ayin and chet) which do not appear frequently. But finding the name Jesus Christ encrypted in this particular portion of Hebrew Scripture is particularly remarkable–given the fact that Jesus actually quoted this very psalm on the cross in the final moments of his earthly existence. Taken together, the odds are not in favor of this being merely a random coincidental encryption.

The likelihood of a random coincidental encryption is further diminished by another word we find encoded alongside “Jesus Christ” in the first eleven verses of this precious psalm of David. Behold:

As can be seen, not only is the name “Jesus Christ” found at an ELS of every 45 letters in this precious psalm of David, but the Hebrew word משיחנו (meaning “our messiah“) is also found encrypted at an ELS of every 27 letters, beginning at the final mem of the sixth word of verse 6.

While it would be remarkable and astonishing to find both “Jesus Christ” and “our messiah” encoded together in the same biblical passage anywhere in the Bible, the significance of finding these two words encoded together at such short equidistant letter sequences in this particular psalm cannot be overstated. Of all of the 150 total psalms in the Psalter, Psalm 22 stands out above all the rest as the psalm that is the most obviously about Jesus Christ. Matthew and John both quoted this psalm in the crucifixion narratives of their gospels in order to show that Jesus was the fulfillment of the prophecies contained within it (Matt. 27:35; John 19:24). Indeed, as previously stated, Jesus himself actually quoted this psalm while on the cross (Matt. 27:46; Mark 15:34)–4 an action by which he identified himself as both the subject of the psalm, as well as the spirit of prophecy speaking through David (Psalm 22:18; cf. Acts 2:29-31).

For all of these reasons, I would go as far as to say that Psalm 22 ranks right up there with Isaiah 53 at the very top of the list of specific Bible chapters that are the most obviously about Jesus. In it Jesus himself (who is the spirit of prophecy) speaks through David in the first person and describes his future crucifixion in tremendous detail as if it had already occurred (Rom. 4:17; Isa. 42:9; John 13:19; 14:29), in accordance with his perfect foreknowledge (Job 36:4; 37:16; Acts 2:23). He speaks of his accusers walking by and mocking him while he’s hanging on the cross (Psalm 22:7-8; cf. Matt. 27:42-43; Luke 23:35), speaks of the Roman soldiers dividing his garment and casting lots for it (Psalm 22:18; cf. Matt. 27:35; Mark 15:24; Luke 23:34; John 19:23-24), and speaks of his executioners piercing his hands and his feet (Psalm 22:16). All of these prophecies in this psalm which were spoken over 1,000 years before by the mouth of David, were suddenly filled with meaning and brought to life the moment that Jesus Christ was crucified. The fact that we find “Jesus Christ” and “our messiah” occurring together in this psalm of all places is saturated with prophetic significance and is undeniably deliberate.

Taken together, it is obviously no coincidence that the name Jesus Christ is encoded in the Hebrew text of Psalm 22. The name of Israel’s God and messiah was deliberately encrypted into the original Hebrew text of this psalm by the spirit of prophecy himself–in order to affirm by yet another mighty infallible proof that this prophetic psalm of David is in its entirety about no one other than the Lord Jesus Christ himself (John 5:39; 1 Pet. 1:10-12), who is the promised messiah of Israel.