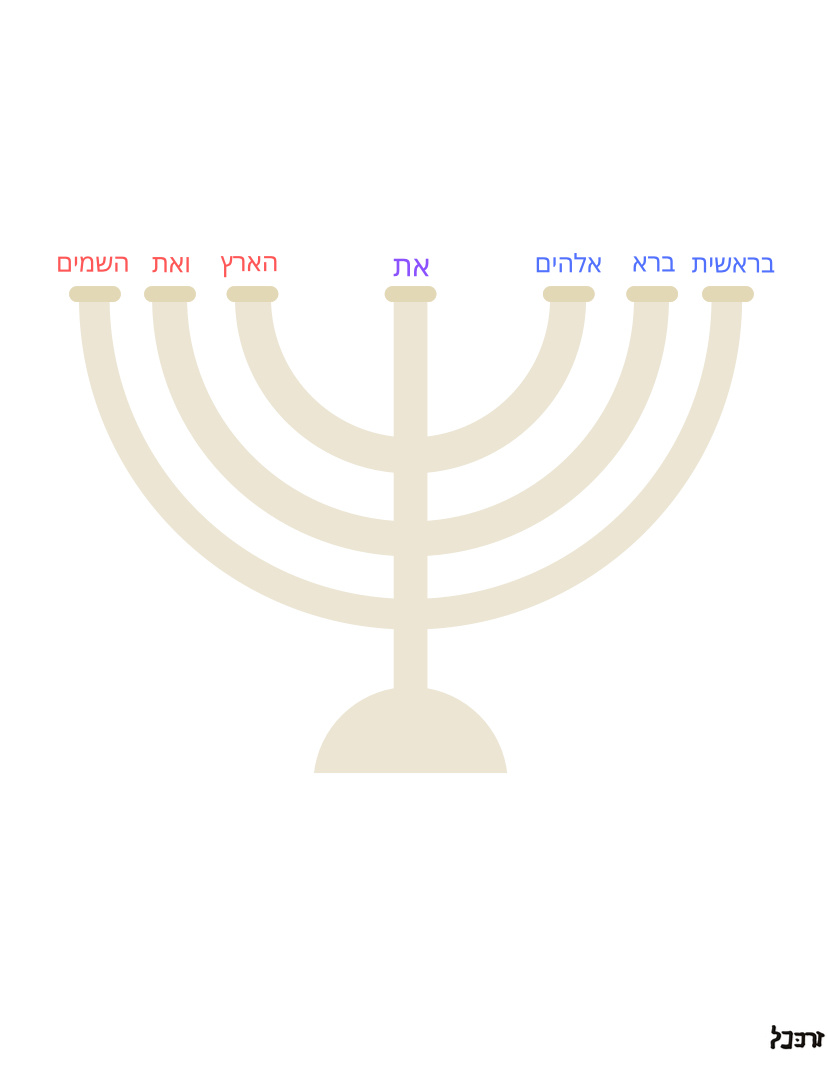 The English Bible opens with the words: “In the beginning God created the heavens and the earth.” While there is a total of ten words in this sentence in English translation—in the original Hebrew text there are only seven. The seven Hebrew words of Genesis 1:1 are as follows:

As we will see shortly, the seven Hebrew words of Genesis 1:1 have been deliberately modeled according to the pattern of the golden candlestick (Exod. 25:31-40). Accordingly, it is necessary that we acquaint ourselves with the general pattern of the golden candlestick and the meticulous numbering system of its seven lamps, as this very meticulous design is intimately bound up with the mystery of the seven Hebrew words of Genesis 1:1.

Note that I have deliberately colored the numbers in the figure above in order to help convey an important mystical truth about the golden candlestick’s design, pertaining to what I refer to as the “3-1-3 pattern.” Simply put–the three branches to the right of the shaft are of one likeness, while the three branches to the left of the shaft are of one likeness. The branches on the left and the branches on the right are antithetical yet complimentary to one another (like male and female). The central shaft is a perfect hybrid of the two opposing yet complimentary sides that it joins together into one body, and it is therefore colored purple to convey this blended nature (blue + red = purple).1 This very meticulous pattern and peculiar numbering system will begin to make a lot more sense when we start to examine the seven days of creation in a future discussion.

Another important thing to understand about the golden candlestick (which should be evident from the image above) is that the branches operate in pairs–each pair being united together as one by the central shaft. The three pairs of branches are self-evident–branches 1 & 4 constitute a pair, branches 2 & 5 constitute a pair, and branches 3 & 6 constitute a pair. As previously stated, the branches on the left and the branches on the right of the shaft are of opposite natures, which means that the two members of any given pair of branches are both antithetical yet complimentary to one another in nature.2 For illustrative purposes we might revert to our previous male & female analogy and liken them unto married couples—with the branch to the right of the shaft representing the male nature, and the branch to the left of the shaft representing the female nature.

The seven Hebrew words of Genesis 1:1 & the golden candlestick

Now that we have that out of the way, let us look at how the seven words of Genesis 1:1 conform perfectly to this pattern:

Here it is in tabular form (with English translation):

One will immediately note that the seven Hebrew words of Genesis 1:1 are not arranged in this pattern as one would naturally expect, that is–according to their word order. Indeed, it is the fourth word of the sentence–the Hebrew particle אֵת, who is entirely to blame for this deviation from the expected arrangement of the seven words on the seven lamps, for it occupies the column corresponding to lamp 7 (rather than lamp 4) of the candlestick. What might be the reason for this?

Of the seven Hebrew words of Genesis 1:1, אֵת stands alone as the odd man out in the verse. It should first be noted that this word isn’t really a “word” at all, but rather an accusative particle which in the Hebrew tongue precedes a definite direct object that is receiving or being affected by the action of a particular verb which precedes it (in this case bara (“created”)).3 As such, this is the only word in the sentence that has no meaning by itself and therefore does not translate. And because it is not technically a “word”, it does not get counted as a word (just as the shaft is not a branch and does not get counted with the other branches). Accordingly, הַשָּׁמַיִם (“the heavens”) is the true fourth word of the sentence, and it therefore appears on lamp #4.

Note that just as the central shaft functions as what we might call a “joiner,” in that it joins the three branches on either side of it together as one unified candlestick–so too the accusative particle אֵת (which just so happens to be situated right smack dab in the middle of the verse), functions as a joiner which unifies the former half of the sentence (containing the subject and transitive verb) with the latter half of the sentence (containing the direct objects). The end result is one unified meaningful statement:

The 4-3 divisional schema of the golden candlestick & the seven Hebrew words of Genesis 1:1

As we can clearly see here, when arranged according to their assigned lamps—the seven Hebrew words of Genesis 1:1 testify of the 4-3 divisional schema that is inherent to the golden candlestick’s design. Although the shaft stands completely apart from and is incomparable to any of the six branches that it unites, and is a perfect equal blend of the two antithetical yet complimentary natures of both sides, (as signified by its purple color)—in the 4-3 divisional schema it always gets counted with branches 1, 2, and 3.

Note that when the golden candlestick is divided according to the above 4-3 divisional schema, we find that the first three branches plus the shaft constitutes 57.1428571% (4 / 7 = 0.571428571) of the entire beaten work; while the remaining three branches constitute 42.857143% of the entire beaten work (3 / 7 = 0.42857143). What is significant about that? Well, there are a total of 28 letters in the seven Hebrew words of Genesis 1:1. When the seven words are arranged according to their seven lamps, we just so happen to get these exact same percentages when we divide the verse by the total number letters in the words corresponding to their lamps, as we do when we divide the golden candlestick by its lamps. Behold:

In this lesson we have seen how the seven Hebrew words of Genesis 1:1 have been deliberately modeled in the likeness of the golden candlestick. We also touched very briefly on the 4-3 divisional schema that was inherent to the candlestick’s design. Although this mystery may seem trivial, it is actually extremely important as it is deeply intertwined with numerous other biblical mysteries which are also tied to the design of the golden candlestick. Indeed, the mystery of Genesis 1:1 will take on a whole new level of significance and make a lot more sense once we start to get into the seven days of creation in a future lesson.

5 thoughts on “The Seven Hebrew Words of Genesis 1:1”