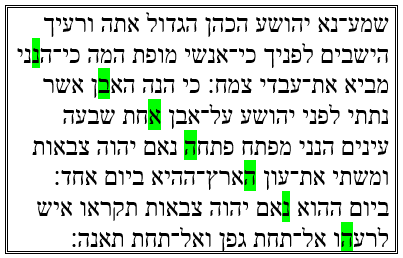 In a recent post, I introduced the phenomenon of ELS Bible codes. In that article I explained what ELS Bible codes are, and demonstrated their existence by way of many clear and irrefutable examples. Those of you who read that article will recall that I limited the focus of that investigation to only one of the three major categories of ELS codes mentioned therein, namely—Type 1 ELS codes. In this discussion we will pick up where the previous investigation left off, and shift our attention to Type 2 ELS codes.

What are Type 2 ELS codes?

Type 2 ELS codes are what I refer to as Commentarial ELS codes, so called because this particular category of ELS code constitutes what I perceive to be something like a form of divine commentary on the biblical text. Whereas the primary function of Type 1 (Testimonial) ELS codes is to reveal and bear witness of Jesus, Type 2 codes are essentially Jesus (the encoder) “commenting” on what is going on in the containing passage. This makes Type 2 codes particularly fascinating, as you are essentially getting a glimpse of God’s thoughts on his own writings.

As with Type 1 ELS codes, Type 2 ELS codes come in a variety of slightly different flavors. Often times these encrypted divine comments manifest as declarative statements in which God simply makes a comment about something going on in the containing passage. Others manifest as phrases and comments that are intended to clarify or shed light on the spiritual meaning of some particular construct or figurative symbol mentioned in the plain text of the containing passage. In either case, the unifying feature of Type 2 ELS codes is that they are designed to enrich one’s reading of the plain text by providing some sort of supplementary information.

As can be seen, the Hebrew construct chain ash ruchi (English: “The fire of my Spirit“) is encrypted in Judges 15:14-15 at an ELS of every 9 letters. The topical relation between the encoded string and the containing biblical passage is blatantly obvious here. The fact that the encoded phrase refers to the spirit upon Samson as “my Spirit” is extremely significant, as it identifies the encoder/speaker as God himself. The inference is that the consuming fire of God’s spirit is what made it impossible to bind Samson.

Some Type 2 ELS codes manifest as whole declarative statements, such as the following one discovered at 4:50 p.m. on December 22, 2021:

The statement hakim har ya’kov (meaning: “He established a mountain of Jacob”) is encrypted in 1 Chronicles 21:22-26 at an ELS of every 22 letters, beginning at the last letter of the word המגפה in verse 22. Given the length of this text-string, it should not be surprising that this is the only passage in the entirety of the Hebrew Tanakh where this ten-letter string is found encrypted at a short-distance ELS.1 The topical relation between the encrypted statement and the containing passage in this example is so blatantly obvious that there is not even a remote possibility of this occurring by chance. In this passage, David purchases the threshing floor of Ornan and builds there an altar unto the LORD. The significance of this is that this threshing floor that he purchased would later become the Temple mount. Thus, by purchasing this threshing floor and erecting an altar upon it—David was (perhaps unknowingly) establishing the holy hill of Zion.

As previously stated, some Type 2 ELS codes manifest as comments which are intended to clarify the spiritual meaning of some particular construct or symbol in the containing passage, as in the following example discovered at 5:25 a.m. on December 6, 2021:

The Hebrew phrase reuonotam (English: “their ideas”) is encrypted in Ezekiel 6:12-13 at an ELS of every 9 letters, beginning at the resh in the word והנשאר in verse 6:12. This is the only passage in the entire Hebrew Tanakh where this eight-letter string is encrypted at a short-distance. It is very obvious that this is an authentic Type 2 ELS, as the encoded phrase is intended to shed light on the spiritual meaning of “their idols” in the plain text. In other words, the proverbial idols of the people that God is referring to in the plain text of the passage are their own ideas.

The Hebrew statement emeth befiv yaphe (literally: “The truth in his mouth is beautiful”) is encrypted at an ELS of every 58 letters backwards, beginning at the aleph in the word אשר in verse 3:3. This is a very long continuous text-string containing two rare letters, so it should not be surprising that this is the only passage in the entirety of the Hebrew Tanakh where this ten-letter string is found encrypted at a short-distance ELS.

The encrypted statement is a divine comment on the containing passage, which specifically references Adam’s words concerning his wife Eve. Adam was created in the image of God, and thus in his original pre-fallen sinless condition he had the very same nature as Jesus. He was thus rightly referred to in the New Testament as the “son of God” (Luke 3:38). Jesus said that out of the abundance of the heart the mouth speaks (Matt. 12:34), meaning that a man’s words reflect the condition of his heart. In his original sinless condition, Adam (like God) had absolutely no evil or darkness in his heart (Deut. 32:4; 1 John 1:5). Out of the abundance of his sinless heart he spoke the whole truth and nothing but the truth, which is obviously very pleasing to the ears of the LORD.

In this example, the encoded text-string is very obviously framed as a response to the line “he will teach us of his ways” in the plain text of the containing passage. Note that in the plain text of the containing passage the speaker is the people of Israel, who are stating that God will teach them of his ways; whereas in the encoded text-string—the exact reverse is true. Here it is God who is the speaker, and he is stating that the children of Israel will learn. The fact that speaker of the encoded text-string here yet again identifies himself as the of God Israel attests once more that the mysterious encoder of the Hebrew Scriptures is none other than God himself.

The statement zeh tavu (English: “It is taboo“) is encrypted at an ELS of every 12 letters in Leviticus 18:25-26. Although the encoded string is only six letters in length in this example, it contains two very rare letters (zayin and tet). Consequently, this is the one and only passage in the entire Hebrew Tanakh where this six-letter string is found encrypted at a short-distance ELS. This exclusivity combined with the obvious topical relation between the encoded statement and its containing passage make it obvious that this is a very deliberate encryption. In the verses immediately preceding the containing passage, the LORD describes a number of various acts of sexual immorality which the children of Israel are strictly prohibited from committing. In light of this, the encrypted statement “It is taboo” obviously fits a little too perfectly with the context of the containing passage to be a coincidence.

The following Type 2 ELS code was discovered on an unknown date several months ago:

The Hebrew phrase adar kal ha-goyim (English: “the herd of all the nations“) is encrypted at an ELS of every 36 letters backwards in 1 Chronicles 17:21-27. Here yet again, this is the only passage in the entirety of the Hebrew Tanakh where this ten-letter string is found encrypted at a short-distance.

The topical relation between the encoded text-string and the containing passage in the above example is obvious and should need no explanation. In the very first verse of the containing passage, David asks: “What one nation in the earth is like thy people Israel, whom God went to redeem to be his own people?” It is blatantly obvious that the phrase “the herd of all the nations” has been deliberately encrypted in this passage with this specific piece of the plain text in mind. Israel is in the LORD’s eyes the herd of all the nations, as they are the flock of his people (Zech. 9:16).