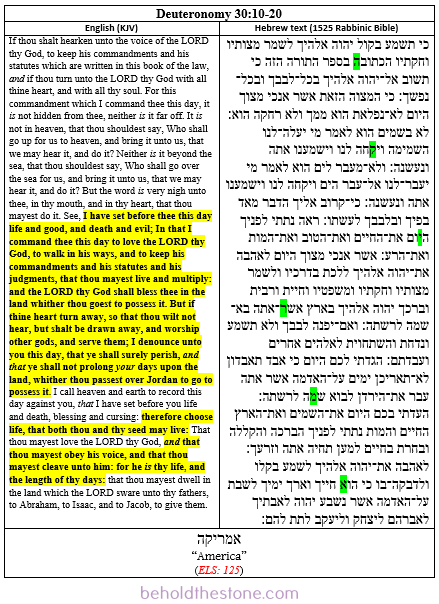 In this post I will reveal and explain the significance of what I believe is an ELS code about America in the book of Deuteronomy.

What are ELS codes?

Presumably, not everyone who stumbles upon this article will happened to have read any of my previous articles about ELS Bible codes. Accordingly, I feel compelled to begin by very briefly explaining what ELS Bible codes are and how they function.

The basic idea of ELS Bible codes is that there are prophetically meaningful messages encrypted in the text of the Hebrew Bible at equidistant letter skip sequences. To demonstrate what this means using an extremely short English text string to illustrate, consider the phrase: “ELS BIBLE CODES.” If we begin at the first letter of this string and skip 6 letters, we get the letter “L”; skip another 6 letters, and we get the letter “S”. Put them all together, and it spells out the acronym: “ELS.”

In the language of biblical cryptography, we would say that the acronym “ELS” is encoded in the phrase “ELS BIBLE CODES” at an equidistant letter sequence (ELS) of 6, or “every 6 letters.” This is the phenomenon of biblical ELS’s in a nutshell.

The basic idea is that the Hebrew Bible (the Old Testament in Hebrew) is saturated with cryptic messages which can be uncovered through the use of a computer program designed to scan the entire Hebrew Bible for specific Hebrew words and phrases encoded at a specified range of potential letter skip intervals.

An ELS code about America

I recently discovered an ELS code about America, which I believe is authentic based on the specific passage in which it is encoded. It is found in part of Moses’ farewell address to Israel in the book of Deuteronomy.1 Behold:

As can be seen, the name “America” is encoded at an ELS of every 125 letters backwards in these 11 verses, beginning in verse 20 and counting backwards through verse 10.

When it comes to ELS Bible codes, it is always important to bear in mind that text strings can appear encrypted in the text just by random chance, and therefore one cannot just always assume that a positive search result for a particular text-string means that the ELS was deliberately planted and is therefore prophetically meaningful. There are a number of various factors that must be taken into consideration when determining whether a particular encoded text string is authentic, or just a random statistical anomaly.2

By far the most reliable and important sign of an authentic ELS Bible code is topical relation. In short, if the encoded text-string appears to be directly contextually relevant to the plain text of the passage containing it, there is a high likelihood that you are dealing with an authentic (that is—divinely encrypted) biblical ELS code.3

The reason why I believe that coincidence can be ruled out in the case of this ELS code about America is because I perceive blatantly obvious topical relation between the content of the encoded text-string and the containing biblical passage.

Why this ELS code about America is obviously deliberate

In order to be able to discern the topical relation between America and Deuteronomy 31:10-20, one must have a working knowledge of America’s colonial history.4 The significance of the word “America” appearing in this specific biblical passage is that this very portion of Moses’ farewell address was quoted by Governor John Winthrop of Massachusetts Bay in 1630, at the close of his prophetic sermon “A Model of Christian Charity”, which set the future nation on a course of destiny.

The significance of Massachusetts Bay in the context of America

At the time that Winthrop delivered his sermon, the Puritan refugees he was addressing were in the process of planting a colony in New England that would just 150 years later become the very cradle of the American Revolution. The degree to which the Massachusetts Bay Colony contributed to the development of the future United States cannot be overstated. This was the site of the Boston Massacre, as well as Revolutionary war battles like the Siege of Boston. It was also here that the infamous sons of Liberty would one day disguise themselves as Native Americans and dump 342 chests of British tea into Boston Harbor.

In short, the spirit of liberty which came to define American national identity was birthed in the colony founded by Winthrop and the Puritans. Accordingly, from heaven’s perspective, this tiny seemingly insignificant colony that they were getting ready to plant at the time that he delivered this sermon, is the future United States.

Contrary to what secular historians would like everyone to believe, the most prosperous and powerful nation in the world was a covenant people before it was a secular nation-state. While the American Republic came into being in 1776-1789, from heaven’s perspective “the American people” came into existence in 1630 when Winthrop delivered this sermon and the Massachusetts Bay Colony was planted.

The Puritan settlers of the Massachusetts Bay Colony (est. 1630) were fleeing religious persecution and came to the new world seeking freedom of worship. Having the Bible-centric worldview that they did, they saw many parallels between Israel’s exodus from Egypt and what we might describe as their “exodus from England.” Just as God had delivered Israel from the cruel bondage of Egypt and brought them into their own land where they could worship him freely, so too the Puritan settlers of Massachusetts Bay believed that God had delivered them from religious persecution of the English crown and had brought them into the new world on eagle’s wings. However, just as Israel’s divine deliverance and blessings was not without some conditions and stipulations, but rather was based on a covenant agreement between the people and God—so it was for the Puritan settlers of Massachusetts Bay.

The Puritans of Massachusetts Bay entered into a covenant with the Lord during the course of their voyage to the new world. It is precisely because of this covenant, and all the promises of divine blessing attached to it, that the United States of America became the most prosperous and powerful nation on the planet. A full record of this covenant agreement is preserved in John Winthrop’s sermon.

While space will not permit us to get into the particulars, this covenant agreement between God and the colonists was in many ways patterned after the Sinai covenant between God and ancient Israel. As it had been with Israel long before them, God promised to continue to bless the people and to make them prosperous. In exchange, the people were to love their God above all else and to walk in his ways. Above all else, this meant maintaining brotherly love and a strict code of social justice as biblically defined. If at any point in the future the people forsook this covenant agreement and began worshiping other gods (e.g. their own prosperity), they were assured that they would perish from off the land that God was giving them. Winthrop’s warnings echoed those of Moses’ to ancient Israel in his farewell address in the book of Deuteronomy.

Thus just as Israel’s inheritance of the promised land was conditional and contingent upon their obedience to the stipulations of the their covenant with God, so it was with the colonists of Massachusetts Bay. In essence, Israel’s exodus from Egypt, the covenant between them and God, and their entrance into “the Promised Land”—became a convenient comparative template for America’s colonial forefathers. It is in the context of this comparison between themselves and ancient Israel, in which Governor Winthrop (being moved by the Holy Ghost) quoted Moses’ exhortation in Deuteronomy 30 in the close of his sermon to his fellow colonial settlers. Behold:

I shall shut up this discourse with that exhortation of Moses, that faithful servant of the Lord, in his last farewell to Israel, Deut. 30: Beloved there is now set before us life and good, Death and evil, in that we are commanded this day to love the Lord our God, and to love one another, to walk in his ways and to keep his Commandments and his Ordinance and his laws, and the articles of our Covenant with him, that we may live and be multiplied, and that the Lord our God may blesse us in the land whither we go to possess it. But if our hearts shall turn away, so that we will not obey, but shall be seduced, and worship and serve other Gods, our pleasure and profits, and serve them; it is propounded unto us this day, we shall surely perish out of the good land whither we pass over this vast sea to possess it;

Therefore let us choose life—that we, and our seed may live, by obeying His voice and cleaving to Him, for He is our life and our prosperity.5

Although Governor Winthrop was unaware of the prophetic significance of these comparisons and his own words, by quoting this portion of Moses’ farewell address in his sermon to his fellow colonists–he had unknowingly set the future nation on a course of destiny by establishing that the history of ancient Israel would function as a prophetic paradigm through which the history of America would unfold. This is a much larger mystery that it would be inappropriate for me to try and explain here, but what this essentially means is that major events in American history would mirror specific historical events that occurred in ancient Israel–the former being “re-enactments” of the latter.

Taken together, it is very obviously no coincidence that we find the word “America” encoded in this specific passage of Scripture. Although it is not at all unusual to find a text-string of 6 letters encoded in several different places in the Bible at this ELS depth, the name “America” in Hebrew contains a quph–one of the least frequently used letters of the Hebrew alphabet. The rarity of this one letter (as pertaining to how seldom it appears in the Hebrew Bible) drastically decreases the probability of this code occurring in this specific passage by random chance.

Given the prophetic and historical significance of this particular passage with regard to America’s colonial beginnings, I am very confident that this ELS code about America is authentic. What I am insinuating is that God (in his perfect foreknowledge) knew that Governor John Winthrop would one day, under the inspiration of the spirit of prophecy, quote this portion of Moses’ farewell address to Israel at the close of his sermon–which was predestined to become the official public record of the future nation’s covenant agreement with God. Accordingly, he deliberately moved Moses to order his words in his final exhortation to Israel in Deuteronomy 30 in such a way, that the Hebrew spelling of the name “America” appears in this biblical passage at an ELS of every 125 letters. This ELS code about America was deliberately planted by the spirit of prophecy in order to bear witness of the prophetic parallels between the founding of ancient Israel and the founding of America.