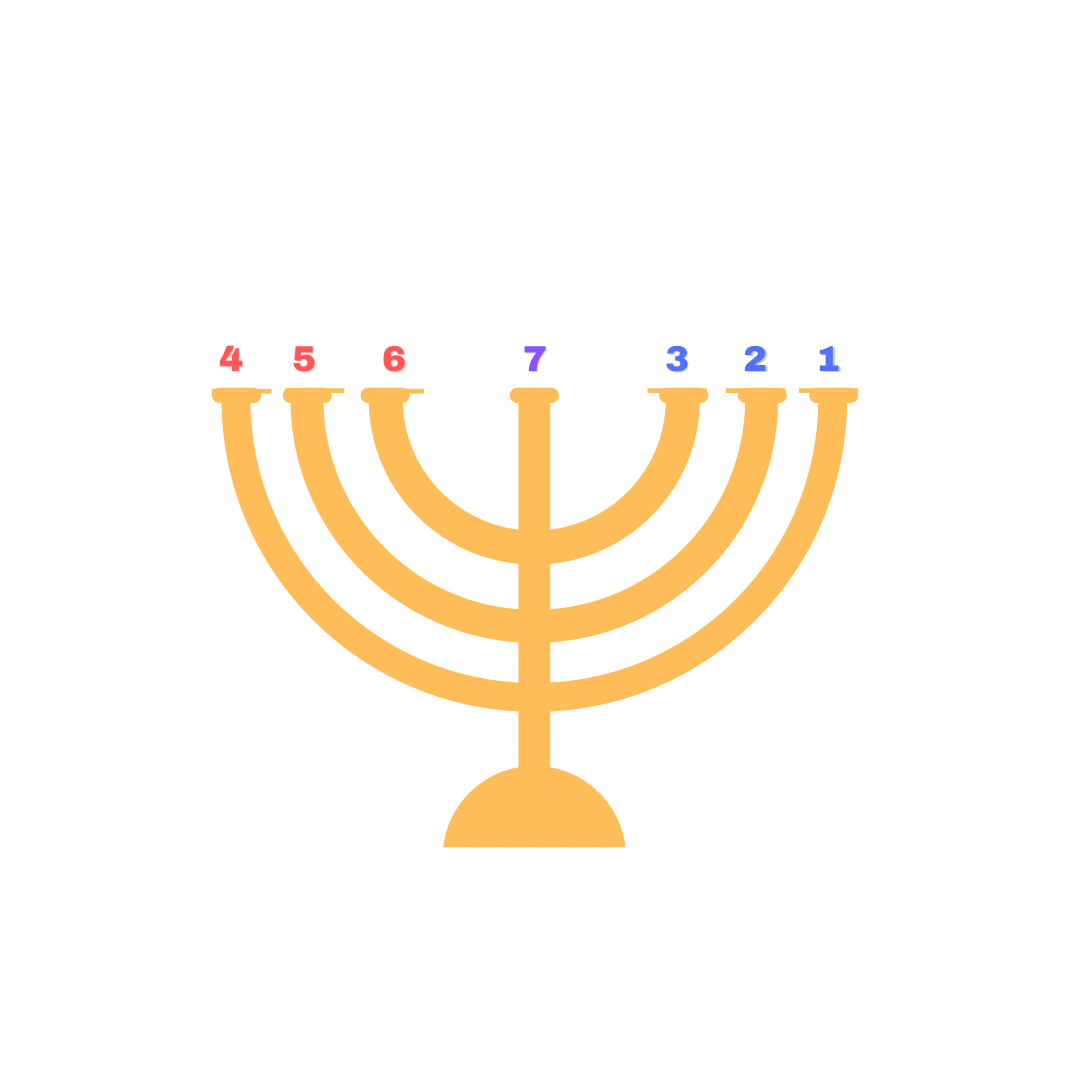 In a previous post, I explained in detail how the seven days of Creation described in Genesis 1:2-3 are patterned after the design of the golden candlestick (the menorah) that Moses made for the tabernacle (Exod. 25:31-40). Today I thought I would share a neat little Bible code that I recently discovered which affirms the truth of this very important biblical mystery.

The menorah was a candlestick of pure beaten gold that Moses made for the tabernacle in accordance with a very strict set of divine instructions (Exod. 25:31-40). It consisted of a vertical central shaft which stood upon a base. Three pairs of branches extended out from the shaft on either side–three branches on the left, and three on the right. Both the central shaft as well as each of the six branches each contained an oil lamp on their capitals. Behold:

The Seven Days of Creation

Most Bible students are unaware of this, but there is a very meticulous pattern that is present in the seven days of Creation as described in Genesis 1-2:3. A close analysis of the biblical narrative reveals that the first six days of Creation described in Genesis 1 actually function as three pairs of days. Each of these three pairs of days consists of what I refer to as a “former day” and a “latter day“.1 The three pairs of days are self-evident: days 1 and 4 constitute a pair, days 2 and 5 constitute a pair, and days 3 and 6 constitute a pair. The three pairs of days are easily discernible once one is aware of the pattern that reveals them to be complimentary of one another. Essentially, the works that God created on each day-pair’s former day, are designed to prophetically foreshadow similar works that he would later create on said pair’s corresponding latter day. Behold:

What we essentially have here is a pattern whereby the works created on days 1, 2, and 3, function as figurative harbingers of more literal works that will be created on days 4, 5, and 6. The lesson that God is attempting to convey to the reader here is that he always shows you what he is going to do, before he literally does it (Isa. 42:9). He does this by always providing a figurative demonstration of some more literal thing that he will do at a later time. The purpose of doing this is to establish the truth of the latter by the witness of the former (John 13:19; 14:29).

The Menorah as a reflection of the Seven Days of Creation

Once one has become acquainted with the pattern of the seven days of Creation, it becomes difficult not to see this very same symmetry present in the design of the menorah. Behold:

It is painfully obvious that the menorah was divinely patterned to reflect the entire week of creation in its design. The three pairs of branches represent the three pairs of complimentary days which each consist of a former and latter day. Likewise the central shaft signifies the seventh day of rest–the one and only day which is holy and unlike any other, and (unlike the other days) has no corresponding “partner.” It is also worth noting that just as the central shaft of the menorah unites and joins together the three pairs of branches and fills them with olive oil, so too the seventh day of rest joins together the three pairs of days of creation week and fills them with meaning.

Link between the Menorah and the Seven Days of Creation affirmed by a Bible code in Exodus 20:11

The relationship between the menorah and the seven days of creation is affirmed by an additional biblical witness. The following single-verse Bible code was discovered at 5:20 a.m. on January 23, 2022. Behold:

As can be seen, the Hebrew phrase מנרת האמת (pronounced: menorat ha-emeth), literally: “the candlestick of truth” (or “the menorah of truth“), is encoded in Exodus 20:11 at an ELS of every 5 letters backwards, beginning at the final mem in the word ביום. I should add that this is literally the only place in the entire Hebrew Bible where this particular 8 letter text-string is encoded within the standard ELS range of between 2-150 letter skips, which means that we are dealing with a statistically significant encryption. Indeed, the fact that this text-string is encoded exclusively in a verse in which God summarily describes his creation of the heavens and earth in six days, and his rest which followed on the seventh day, allows us to conclusively rule out the possibility of a coincidental encryption. Such obvious topical relation between the encoded text-string and the plain text of its containing passage tells us that this is undeniably deliberate. As the court magicians said to Pharaoh: “This is the finger of God.” (Exod. 8:19)

The pattern and symmetry reflected in the design of the menorah is also present in the seven days of Creation. As we saw, the six days in which God did all of his work operate as pairs. Each of the three pairs of days consists of both a former day (1, 2, & 3), as well as a latter day (4, 5, & 6). We saw how that for any given day-pair, the works that God created on the pair’s former day foreshadowed the works he would later create on the pair’s corresponding latter day.

The menorah was deliberately patterned by God to reflect the seven days of Creation in its design. The three pairs of days in Genesis 1 correspond to the menorah’s three pairs of branches, while the seventh day of rest (which is set apart from the other six days) corresponds to the menorah’s central shaft–which is set apart from the six branches it joins together. By encoding the phrase “the menorah of truth” in the original Hebrew text of Exodus 20:11, God has provided an additional confirmatory witness in his Word which affirms this divinely established spiritual link between the menorah and the seven days of Creation.