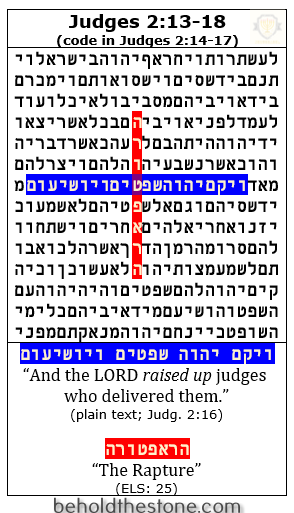 There is no doctrinal concept that seems to stir up strife and controversy among believers quite like the Rapture. It is perhaps one of the most divisive and polarizing topics in Christianity today, and it’s one that practically every believer seems to have very strong and unbendable views on. I must confess that personally, this is not a subject that I am either passionate or dogmatic about. Nevertheless, because I know that this is a topic that tends to captivate a lot of people, I thought I would take the opportunity to share a new discovery I made just a few days ago which I think will be of interest to many of my readers. This discovery concerns what I perceive to be a never-before-seen Bible code about the Rapture, which until today has been kept hidden within an obscure passage in the book of Judges for thousands of years, patiently awaiting its own discovery.

What is the Rapture?

The belief in a physical bodily resurrection of the faithful has historically been a central tenet of both the Jewish and Christian faiths, and clear prophetic allusions to this climactic event can be found throughout both the Old and New Testaments. Based largely on Paul’s description of the first resurrection in 1 Thessalonians 4, the belief developed that immediately following the resurrection of the saints, the body of Christ will be supernaturally removed (snatched) from the earth by the Lord himself, and will be caught up in the clouds to meet him in the air. The term “rapture” was coined relatively recently in Church history to refer specifically to this climactic event of apocalyptic expectation.

There are many different variations of this doctrine held by believers, which is likely why it has come to be such a polarizing and divisive topic. There are also many Christians who deny the concept of a rapture all together.1A discussion of all of the different variations and interpretative frameworks of the Rapture (premillennialism, amillennialism, postmillenialism, etc.) unfortunately remain beyond the scope of the present analysis. Suffice it to say that the doctrine of the rapture is most strongly associated with those in the premillennial camp, and it is their interpretive framework which is most dominant.

How I discovered the Bible code about the Rapture

The Bible code about the rapture I am about to share was discovered somewhat accidentally. Out of mere curiosity, I decided to run a search for the phrase “The Rapture”. However this presented some difficulties. Not only is the English term “rapture” not found anywhere in the plain text of the Bible, but there is no precise equivalent for this word in the Hebrew language. This meant that in order for me to search for the encryption of this phrase in the Bible, I first had to transliterate it into Hebrew. This resulted in the following eight-letter word: הראפטורה (pronounced: “ha-rapture“). From there I keyed this word into my Bible code search software, set the ELS range to 2-100,000 letter skips, and executed a search.

Bible code about the Rapture revealed

Given that the entire phrase is eight letters long and contains two extremely rare Hebrew letters (pey and tet), I didn’t really anticipate that I would find anything significant–if at all. Not only did the program return 3 positive results for this string in the Leningrad codex, but to my utter astonishment–one of the positive hits indicated that this precise eight-letter word was encrypted in the book of Judges at an ELS of every 25 letters backwards. Astonished, I immediately sat up and clicked on the result to analyze it, and was confronted with the following code matrix:

As can be seen, the phrase “the Rapture” is encoded at an ELS of every 25 letters backwards in Judges 2:14-17, where it intersects with the following line of topical correspondence: “And the LORD raised up judges who delivered them.” There’s a lot of meaning to unpack there, but let’s hold that thought for a moment and talk probability.

I have stated in previous articles that I am not a statistician, however anyone with even a basic command of the Hebrew tongue will be able to attest that the odds of finding this eight-letter word encrypted anywhere in the Bible at such a ridiculously small ELS are next to zero. The reason for this is that the string contains two extremely rare Hebrew letters–pey and tet, as I stated previously. Having even 1 of these letters in an eight-letter string makes it highly unlikely that you’re going to find that string encrypted anywhere in the Tanakh at a short-distance ELS, while having 2 of them makes it almost certain you won’t find it anywhere.2 The fact that we find this eight-letter word encoded anywhere in the Bible at an ELS of every 25 letters is remarkable and screams deliberate design, and this is especially true in light of the line of topical correspondence which intersects with the word rapture in the grid.

Bible code about the Rapture explained

The first thing that should be noted is that the line of topical correspondence in this example uses the verb l’qum (meaning: “to raise up“) with reference to judges/deliverers of Israel. I have italicized this phrase in the translation for emphatic purposes, as in the prophetic context of the Bible code this is speaking of the saints who will be resurrected (literally “raised up“) when the Rapture of the body of Christ takes place. The truth of this interpretation is reinforced by the fact that this very same verb is used in Hosea 6 and Isaiah 26 to describe the resurrection of the saints (Hosea. 6:2; Isa. 26:19).

The inferred meaning of the full code matrix seems to be that God will raise up (resurrect) a body of glorified/resurrected judges (rulers), who will deliver the nation of Israel from future enemies who will plunder her. The intersecting of this line with the encryption of the word “rapture” seems to imply that this will occur at the second coming of Jesus. Interestingly, this scenario just described fits perfectly with the context of the Gog-Magog war described in Ezekiel 38-39, in which the world armies headed by Gog are described as entering into the land of Israel illegally with the specific intention of plundering her (Ezek. 38:11-13; 39:10). It is also noteworthy that the code uses the word “judges” to describe the resurrected saints, in light of the fact that the New Testament states very plainly that the saints will judge the world (1 Cor. 6:3).

Final thoughts on the Bible code about the Rapture

In this brief analysis, we have seen that the word הראפטורה (“The Rapture” transliterated into Hebrew) is encrypted in Judges 2:14-17 at an ELS of every 25 letters backwards, where it intersects with a line of topical correspondence within the text grid to form what appears to be a cryptic prophecy concerning the rapture of the Church. Taken together, the code matrix appears to foresee that God will resurrect (“raise up”) a body of glorified kings and priests, who will come with him to deliver Israel from enemy nations who have come to plunder her when he returns in power and great glory.