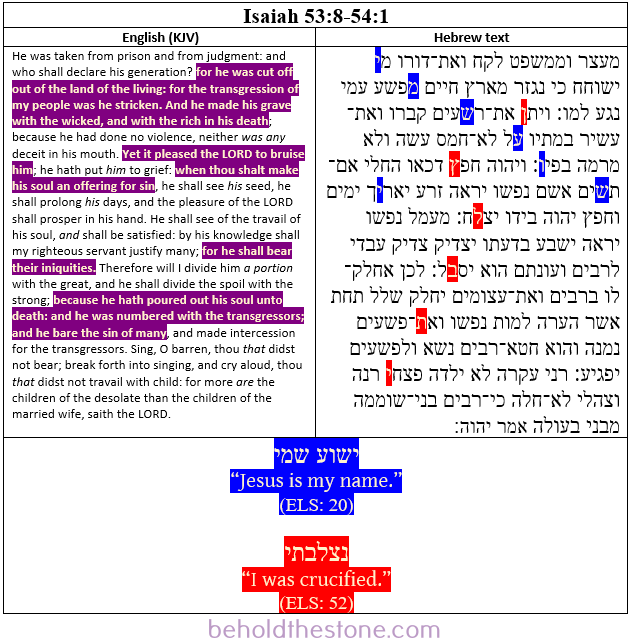 For Christians seeking proof of the messianic identity of Jesus in the pages of the Old Testament, Isaiah 53 is the Mecca of all prophecies. This chapter so plainly describes the rejection and crucifixion of Jesus Christ that one is left bewildered trying to figure out how observant Jews could read these twelve verses and not conclude that it is talking about Jesus.1 The fact that anyone is able to read these same prophecies and arrive at an entirely different conclusion about the identity of God’s mysterious “servant”, inevitably forces us to ask–are the prophecies of Isaiah 53 really as objective as they seem, or have we just been conditioned as Christians to anachronistically inject Jesus into a prophecy that isn’t really about him? Today I am going to demolish such uncertainties and objectively prove that these prophecies are about Jesus. The wrecking ball with which I will accomplish this feat is the Bible code of Isaiah 53.

What are ELS Codes?

The Bible code of Isaiah 53 is what is known as an ELS code. ELS is an acronym that stands for Equidistant Letter Sequencing.

The basic idea of ELS Bible codes is that the Hebrew text of the Tanakh (what Christians call the Old Testament) contains divinely encoded words, phrases, and statements encrypted within the text at equidistant letter sequences, which can be extracted from the text using a computer program to conduct ELS letter skip searches. The authenticity of such codes are attested by the presence of obvious topical relation between the encoded string and its containing biblical passage.

To help paint a clearer picture of the phenomenon just described, let us consider an example. Behold the following verse:

Note that when you start at the very first letter of the verse, and skip every five letters–you’ll find that every 5 letters spells out אשיר לו (pronounced: ashir lo), which translated to English means: “I will sing to him.“ The fact that this hidden statement appears in a verse which contains such blatantly obvious topical relation (e.g. “I will sing to him” in a verse talking about praising the name of God with a song) tells us that this did not occur by random chance.

The basic idea of ELS codes is that the entire biblical text is saturated with encoded words and phrases which converge to form meaningful cryptic prophecies or supplemental information that often breathe new life into the surface level narrative of the passage in which the words are encoded.2 For those who believe that biblical ELS codes exist, it is thus as if the Bible has two independent yet complimentary narratives–one on the surface which is visible, and one hidden beneath the surface which is invisible.3

The first person that we know of to speak of what we now refer to as ELS codes within the Bible was a medieval Jewish rabbi by the name of Rabbeynu Bachayah (1255 – 1340 CE). In a commentary on the Torah written in the year 1291, Bachayah mentioned in a footnote on Genesis 1 that if you begin at the first letter of Genesis 1 and count 42 letters four times (making note of every 42nd letter), you will find the word בּהרד encoded within the text. He argued that this word had been deliberately encoded at the beginning of Genesis 1 by God, who was using it to establish a connection between the birth of the moon and the birth of the world.

Despite Bachayah’s promising finding, his observation largely went unnoticed, and ELS Bible code research would lay dormant for several centuries. Then, over 600 years later, a twentieth century Jewish Rabbi by the name of Michael Dov Weissmandl happened to learn of the phenomenon while reading Bachayah’s commentary on Genesis. The notion of ELS codes in the Torah aroused Weissmandl’s interest and curiosity enough to conduct his own experiments. These labors resulted in him finding the Hebrew word תּורה (“Torah”) encoded at 50 letter interval skips at the very beginning of the book of Genesis. It is largely Weissmandl’s experiments which would first spark modern interest in the idea of Bible codes of the ELS variety, and his findings basically fueled all subsequent ELS Bible code research that would follow after the advent of computers.

In making the claim that biblical ELS codes within the Bible are real, I am at odds with a sizable portion of the Christian and Evangelical communities–many of whom reject the code’s existence on the grounds that God does not speak cryptically or in riddles, and some of whom go as far as to claim that looking for codes in the Bible is a form of divination, which the Bible strictly forbids (Deut. 18:9-14).4These objections are ridiculous and cannot be defended biblically. Firstly, the Bible does in fact state that God speaks cryptically and in riddles (Psalm 49:4), so I don’t know what authority such Christian ministers are basing their idea that God does not reveal truths cryptically on–but it certainly is not the Word of God. Secondly, searching the Bible for divinely encoded messages only falls under the umbrella of divination if one’s intent in finding such codes is rooted in a vain attempt to foretell the future for their own personal gain.5

The Bible gives us a very simple test for determining whether or not a thing be of God. If it testifies that Jesus Christ is come in the flesh, it is of God; if it doesn’t testify that Jesus Christ is come in the flesh, then it is not of God (1 John 4:1-3). As we are about to see, the Bible code of Isaiah 53 (an ELS code contained within the Hebrew text of Isaiah 53) testifies of the messianic identity of Jesus Christ, and is therefore its own witness that it is of God.

The Bible code of Isaiah 53 revealed

As the Bible code of Isaiah 53 is directly relevant to the passages of Scripture in which it is encrypted, I feel like it would be a good idea to begin by taking a look at the full text of this chapter, just so that we are clear about the precise nature of the subject matter of the material in which the code is contained. Below is the full chapter of Isaiah 53 as it appears in the KJV:

Who hath believed our report? and to whom is the arm of the LORD revealed? For he shall grow up before him as a tender plant, and as a root out of a dry ground: he hath no form nor comeliness; and when we shall see him, there is no beauty that we should desire him. He is despised and rejected of men; a man of sorrows, and acquainted with grief: and we hid as it were our faces from him; he was despised, and we esteemed him not. Surely he hath borne our griefs, and carried our sorrows: yet we did esteem him stricken, smitten of God, and afflicted. But he was wounded for our transgressions, he was bruised for our iniquities: the chastisement of our peace was upon him; and with his stripes we are healed. All we like sheep have gone astray; we have turned every one to his own way; and the LORD hath laid on him the iniquity of us all. He was oppressed, and he was afflicted, yet he opened not his mouth: he is brought as a lamb to the slaughter, and as a sheep before her shearers is dumb, so he openeth not his mouth. He was taken from prison and from judgment: and who shall declare his generation? for he was cut off out of the land of the living: for the transgression of my people was he stricken. And he made his grave with the wicked, and with the rich in his death; because he had done no violence, neither was any deceit in his mouth. Yet it pleased the LORD to bruise him; he hath put him to grief: when thou shalt make his soul an offering for sin, he shall see his seed, he shall prolong his days, and the pleasure of the LORD shall prosper in his hand. He shall see of the travail of his soul, and shall be satisfied: by his knowledge shall my righteous servant justify many; for he shall bear their iniquities. Therefore will I divide him a portion with the great, and he shall divide the spoil with the strong; because he hath poured out his soul unto death: and he was numbered with the transgressors; and he bare the sin of many, and made intercession for the transgressors. (Isaiah 53:1-12)

Written sometime between about 740 – 700 BC, Isaiah 53 is hands down probably the most blatantly obvious Old Testament prophecy describing the rejection and crucifixion of Jesus Christ.

As can clearly be seen, Isaiah 53 is saturated with prophecies which are obviously about Jesus Christ, to the point that it is difficult to conceive of how one could possibly read the above chapter and arrive at any other conclusion. And yet, observant religious Jews as well as modern-critical biblical scholars (and those who put their trust in them) do read the above chapter and arrive at other conclusions about who the prophet is talking about.

Let us be very clear that it is not God’s will for anyone to be in doubt about who it is that the prophet is speaking of in this chapter (Acts 8:26-35). He therefore left not himself without witness (Acts 14:17; cf. Isa. 48:3-8; John 13:19; 14:29), and placed multiple ELS codes in this chapter in which he reveals himself as the subject of the prophecy. Behold the Bible code of Isaiah 53:

The Bible code of Isaiah 53 explained

As can be seen, the Hebrew statements ישוע שמי (“Jesus is my name”) and נצלבתי (“I was crucified”) are both encoded in Isaiah 53:8-54:1 at different equidistant letter sequences. The first of these statements is encoded at an ELS of every 20 letters backwards beginning at the second yod in the word יִארִיךְ (rendered “prolonged” in the KJV) in verse 10.6 The second statement is found at an ELS of every 52 letters forwards beginning at the final nun of the first word of verse 9. This is the Bible code of Isaiah 53.7

Final thoughts on the Bible Code of Isaiah 53

It is common for the skeptics of Bible codes to try and argue that when you repeatedly skip a set number of letters in a huge text like the Bible, it is practically inevitable that clusters of letters are going to occasionally come together to form meaningful words in accordance with the laws of probability and statistics. While it is true that ELS searches can and do occasionally turn up words and phrases just by random chance, it is another thing entirely when the encoded phrase or statement occurs in prophetically and topically relevant biblical passages, and does so at statistically minuscule probabilities. The authenticity of such codes is irrefutable, and is very obviously indicative of deliberate intelligent design. In the case of the Bible code of Isaiah 53, we have the statements “Jesus is my name” and “I was crucified” both encoded in the most blatantly obvious description of the rejection and sacrificial death of Jesus Christ in the entire Old Testament. By encoding these two prophetically meaningful first-person statements in this specific chapter, Jesus is not only affirming his messianic identity by identifying himself as the subject of the chapter’s prophecies, but he is also identifying himself as the spirit of prophecy speaking through Isaiah, as well as the author of the ELS codes hidden within these prophecies.